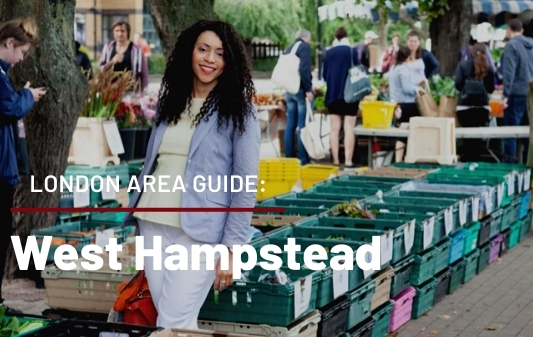 What makes West Hampstead such a fantastic part of London? I wanted to share 5 of the top reasons to love West Hampstead and give you a virtual walkthrough of another fantastic area of London. West Hampstead is a fantastic area in northwest London with a real sense of community.  It is highly desirable for so many whether it’s young professionals who love the vibrant social scene or families who have a ton of choice for schools, green space and community events.

Where is West Hampstead?

Before we jump in, here’s a quick orientation.  West Hampstead is located in zone 2 in northwest London. Its neighbours include Hampstead to the east, South Hampstead and Swiss Cottage to the south, Kilburn and Mapesbury to the west and Cricklewood to the north.

Number one on my list is the restaurants & eateries.  The heart of West Hampstead is its high street, West End Lane, where you’ll find a wide array of fantastic eateries, cafes, bars and shops.

Some of the local favourites include West Fish Café which is a modern café and brasserie that serves delicious homemade dishes with ingredients sourced locally.  The space was converted from a fishmongers shop and today offers casual café by day to hip, jazzy romantic brasserie by night.

For coffee, you’ve got so many options, but some local standouts include Wired just around the corner from West Hampstead tube station, or Intermission Coffee which offers sustainable coffees & teas.  Lola’s Bakery has set up shop serving up its signature selection of premium baked goods along with coffee, and there’s a Gail’s bakery for divine fresh baked goods & bread.

West Hampstead’s most popular bars include The Railway, a friendly pub that’s the perfect place to watch a football match, it’s just near the tube station, so can be a great place to grab a pint before heading home.  There’s also the Black Lion which has roots going back to 1666.  Personally, I love the ambience of The Gallery, with its brick walls and wood floors that creates a hip and casual vibe.  They serve not only great drinks but great food as well.

For ethnic delights, West Hampstead has loads of choices.  For Indian, Colaba Indian Dining is excellent, and Banana Tree is fantastic for its pan-Asian cuisine.  Sushi Tokoro is the spot for sushi and is run by the former chef at Nobu.

Second on my list is the stunning homes of West Hampstead. West Hampstead has many beautiful Victorian-era terraced homes, converted flats and mansions blocks.  Detached houses are rarer but can be found.  Average property prices in the area are around £940,000, according to Zoopla, and this graph shows average prices paid over the last 12 months versus current value.  Average price per square foot ranges from £892 for terraced homes to £1011 for detached houses.

We sold this cool duplex flat in West Hampstead last year for just under £1M.  Located in a converted school, it has loads of charm and character and even comes with resident parking which is really hard to find.

Currently,  the most expensive house on the market in West Hampstead is this £5.5M property on Fairhazel Gardens, with over 5,000 square feet.

West Hampstead’s location is superb for its connections.  There’s West Hampstead tube which is zone 2 on the Jubilee line; the overground station with its expansive route connecting locations as far off as Richmond in the Southwest to Stratford in the East.  Then there’s also the Thameslink rail station which puts you on the 115-mile rail network that picks up locations including St. Albans, Luton, Brighton, and Cambridge.  Also, dozens of bus routes head North and South into Central London.

West Hampstead has 23 primary schools, of many different religious affiliations in addition to secular options.  A couple of notable outstanding rated schools include Kingsgate Primary and St. Eugene de Mazenod Roman Catholic Primary School.  In addition, there are 7 secondary schools, outstanding rated includes Brondesbury College London, Islamia School for Girls and St. Augustine’s Federated Schools: CE High School. There are also 3 sixth form colleges.  You can view the Ofsted rankings report where you can find out more about the schools in the area.

Finally at number 5 is the Green Space. Living in West Hampstead, you’ve got plenty of choice for places to lounge and enjoy nature.  There’s local Kilburn Grange with 8 acres including tennis and basketball courts as well as an outdoor gym.  If you’re really looking for major outdoor space to roam, there’s Hampstead Heath covering almost 800 acres and has one of London’s highest points.  Rambling and woody, free and wild at some points, the Heath also includes 3 open-air pools and the famous Kenwood House.

What do you love about your local neighbourhood, and is there a place you’d like to know more about in London? Let me know in the comments!

Want to discover one of Northwest London's best neighbourhoods that no

Join me and take a tour around this two-bedroom, two-bathroom home

Onyx Property Team is a London based, tailor-made property consultancy with customer service at its’ core.